Musée Imaginaire, and how it changed Art History

In my other, non-blogger life, I'm a masters student in European studies.  Mostly this means I'm stressed about papers and exams, presentations and grades far more than is good for my health.  But every once in a while, I get to experience a moment of breakthrough.  I am in a class discussion, for example, and it suddenly hits me that some concept we are working through is really quite powerful.  My whole world seems to shift its color scheme as I realize that this concept implies an important new way of thinking, which can open up connections I have never seen before.  This was the case earlier this week when discussing the French cultural theorist André Malraux, and his concept of the Musée Imaginaire (imagined museum).

Malraux worked for the French government after World War II, theorizing about questions of cultural education.  In his book La Musée Imaginaire, he described what he saw as the important shift in how art was studied, understood and taught in the past centuries:

Long ago, Malraux explained, "art" was almost nonsensical as a category.  Works of architecture, sculpture and painting were commissioned for specific functions, often religious.  While artworks were occasionally analyzed and compared systematically (for example by Winkelman), mostly, they were still tied to their function and to their location.

Then the museum gained popularity.  (Admittedly the growth of the museum is directly tied to the rather unpleasant story of European colonialism, and the wish to bring "exotic" artifacts from far off places back to Europe and show off "savage" beauty to admiring Europeans... but that's a subject for another post.)  The function of the museum, was to bring together works of art deemed of quality and to use them to better teach a story of culture and history.  And they did bring together works, from Ancient Egypt to middle ages Italy, into a gallery in London, say.  These works would never have been in the same country together, let alone the same room, except for the museum.

And then the next revolution happened.  The photographic revolution that is.  As it became inexpensive and practical to make photographic reproductions of art works and put them into books, even more distant works could be placed even closer together, for a viewer to compare and contrast from the comfort of his/her own home.  Anyone who could look at a book had access to a virtual museum.  This is what Malraux called the "Musée Imaginaire".

Here's Malraux sorting the photo reproductions of artworks for the Art History textbook he was writing: 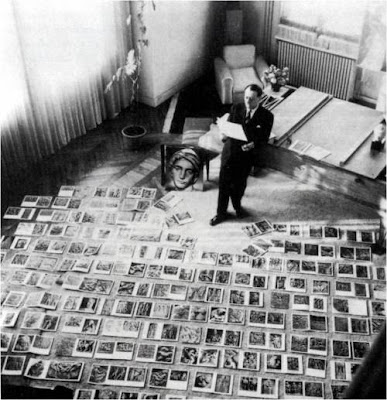 Now students of art history could place a picture of Chartres Cathedral, constructed in Paris, France in between 1193 and 1250 above a picture of, I don't know, what about the Buddhist Temple Borobudur, built in the 9th century in Indonesia (sources for both images are their respective Wikipedia sites): 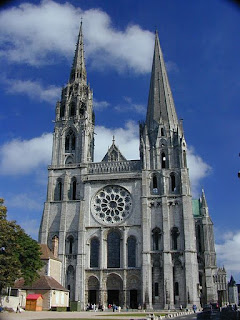 These are both monumental works of architecture, built to be places of religious worship, so the comparison strikes me as one that could be highly valuable and informative.  Isn't it just shocking however, to think that we can compare these two works so directly, although they are hundreds of years and thousands of miles apart!

Another feature of the Musée Imaginaire is that the size of an artwork no longer matters.  Seeing a work in real life, size, whether the object is a small hand-held portrait, or a giant wall-sized fresco is usually one of the most important aspects of the work's impression.  This gets lost in an Art History book, where all the reproductions are the size of the page.

Neither the museum nor the photographic reproduction completely replaced the visiting a work of art in its real location.  They were just revolutionary add-ons which changed how we could study art.

Now what about the revolutionary new form of the Art History blog, how is that changing our ability to understand Art History?
Posted by Alexis at 9:00 AM